Back to the MLS Cup Final 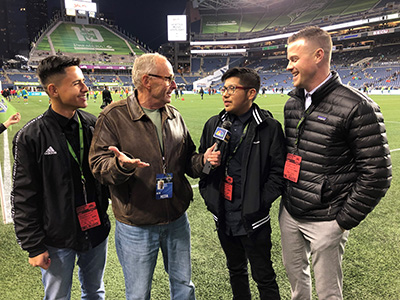 For the third time in four years, Seattle Sounders FC are back in the MLS Cup final. It all started with the win over FC Dallas in such an intense match, in front of the home fans, that went into overtime. The hero was the MLS Comeback Player of the Year Jordan Morris, who scored a stunning hat trick that made the final score 4-3, sending the Sounders into the Western Conference semifinals.

As a member of the Sounders Media Institute I was also able the watch the next match from the press box at Century Link Field against Real Salt Lake. The Sounders fans were ready.

As the first half began the Sounders started off playing a high press to go after the first goal. Four minutes in, Nicolas Lodeiro sent a shot right at the RSL goal that hit the woodwork, leaving the fans wanting more. As the first half ended level, Seattle needed a way to keep possession so they could create more possibilities. In the 64th minute, the Sounders capitalized on their first goal of the night with an amazing corner kick by Lodeiro that went straight to Gustav Svensson’s head so he could flick it past RSL keeper Nick Rimando.

And in the 80th minute, Raul Ruidiaz got an excellent through ball from Svensson. Ruidiaz had time to look around and find Lodeiro inside the box. Lodeiro finished it to give the Sounders a 2-0 win.

As the final whistle was blown the stadium was filled with a excitement as the fans celebrated their team going back to the Western Conference final This is what the Sounders were built for and they showed it again on Tuesday when they beat the team that was supposed to be the best-ever in MLS, LAFC, 3-1.